Love. You can feel that word. In its abundance, love lights the fires of our brightest moments, in its least, our burning regrets. Without getting too dramatic, love is the reason we’re alive and choose to keep living.

While we all have done wonderful — and not always recommended — things in the name of love, here are 10 gifts in history and pop culture that are great examples of a love that knew no bounds, and had a budget that matched the size of the gesture.

The perennial inspiration for royals’ fans worldwide, the Duchess of Cambridge’s ring — a 12-carat oval blue Ceylon sapphire surrounded by 14 diamonds — first appeared on the hand of Lady Diana Spencer when she was engaged to Prince Charles in 1981.

The choice caused a small scandal at the time: the young bride-to-be chose the ring herself, and opted for a ready-made ring instead of going bespoke. The royal in-laws were also not impressed that other brides could have the same ring as the future princess, even if such an option would put the suitor back £28,000 (that’s £84,267 in today’s money).

After Lady Diana’s death in 1997, Prince Harry chose the engagement ring as his late mother’s heirloom and later exchanged it with Prince William for another treasure, a gold Cartier watch, when his brother planned to propose to his future wife in 2010.

A post shared by Duke and Duchess of Cambridge (@dukeandduchessofcambridge)

Photo Credit: The Duke and Duchess of Cambridge Instagram

One of the sparkliest stars in Golden-Era Hollywood, Elizabeth Taylor and Richard Burton were the power couple whose love and budget knew no bounds. We could dedicate an entire post to all the late star’s treasures (comment below if you’d like that!), including the Taylor-Burton diamond.

Purchased as a 241 carat rough diamond by Harry “the king of diamonds” Winston in 1966, he had the diamond cut into a pear-shaped gem with 58 facets at almost 70 carats. Cartier bought the diamond from Winston in 1969 for $1 million, and the next day, Richard Burton bought the diamond from Cartier for $1.5 million (but the official number is unknown). The Taylor-Burton diamond became the pendant of a necklace, designed to fit Taylor so perfectly it covered her scar from a tracheotomy.

While the Taylor-Burton marriage didn’t last, they remained each other’s great love, right up to the last love letter Burton wrote Elizabeth — which she received when she returned from his memorial service in London..

Another great (and much calmer) American love story is between past President Barrack Obama and First Lady Michelle Obama. Before Americans were swept up in the euphoria of voting for the first African American president of the United States, the Obamas met at the same law firm, where Michelle was assigned to Barrack as his mentor while he was a summer associate.

In 2009, 17 years of marriage later and the first year into the historic presidency, Barrack presented Michelle with a floral diamond brooch by Italian designer Garavelli, which was bought at the family’s jeweller in Chicago. Also known as the FLOTUS (First Lady of The United States) Flower, Mrs. Obama has worn her brooch plenty of times on and off camera.

Another well-loved Hollywood celebrity, Jennifer Lopez has been engaged five times throughout her life, the most recent being former professional baseball player Alex Rodriguez. In March 2019, J-lo was presented with 15-carat emerald cut diamond ring estimated at $1.4 million, or almost £823,000. Despite the couple calling things off and wanting to stay on friendly terms, it’s unknown if J-lo has returned the ring to Rodriguez.

Taking reference from another family heirloom and love of sapphires, Princess Eugenie of York debuted her sapphire engagement ring in January 2018, which was presented to her by long-term partner Jack Brooksbank while on vacation in Nicaragua.

The ring itself is a sunburst pink and orange Padparadscha (pad-pah-rad-sha) sapphire as the center stone surrounded by ten diamonds, and looks very similar to the engagement ring her father, Prince Andrew, gave her mother Sarah Ferguson when they were engaged in 1986. Apart from the distinct colour, padparadscha sapphires are seen as the rarest and most beautiful of the gemstone family, its name meaning “lotus flower” in Sanskrit and found in the Sri Lankan region.

Pop sensation Lady Gaga was going to be a Monster Bride when her engagement to actor Taylor Kinney was announced in 2015, revealing a heart-shaped 6-carat pink diamond as the center stone with the entire ring base covered in small white diamonds on a platinum band. The singer’s favourite part about the ring? The letters “T” and “S” (Gaga’s given name is Stefani) sandwich a little heart, also covered in diamonds. While they never made it down the aisle, the moment of love was captured at £500,000.

A lover of diamonds herself, Beyonce’s engagement ring is a 24-carat emerald cut diamond ring with a platinum split shank, given to her by husband Jay-Z. The bold sparkler has been listed as one of the most expensive engagement rings of all time by more than one bridal blog, with an estimation of about $5 million.

The actress turned princess loved pearls, so much so that her fiance Prince Rainer of Monaco took her to the Van Cleef & Arpels boutique in New York City, where they met with Louis Arpels. Princess Kelly would choose numerous wedding presents between 1953 and 1956, including a three-strand necklace with a diamond swirl motif. Years later for the 2019 Rose Ball in Monaco, Princess Caroline of Hanover, Princess Grace’s daughter, wore all her mother’s pearl and diamond jewellery for the first time since the monarch’s death.

A wildcard (but worthy) addition to the list, Cardi B’s engagement ring is fit for hip hop royalty. Her token of love features a total of 8-carats in diamonds, which includes a large pear-shaped center stone, two diamond halos (one in white and one in pink), and more white diamonds on the shank. The coloured diamonds add an extra special touch, and the ring seems to be set on either platinum or white gold. The final price was quoted by Cardi at “a-half million” dollars, and the couple (her husband is Offset, a member of rap group Migos) have been married since 2017.

Our final token of love isn’t jewellery, and it is repeatedly used as an example of the grandest expression of love. The Taj Mahal was built as the final resting place for Mumtaz Mahal, who died after giving birth to her 14th child with the emperor in 1631.

The endeavour took almost 20 years, and 20,000 artisans before it was finished, and it is also where the emperor himself was laid to rest five years after the finishing touches were added to the gardens. The grand total for such a commitment? £666,424,258.40, or $916 million. 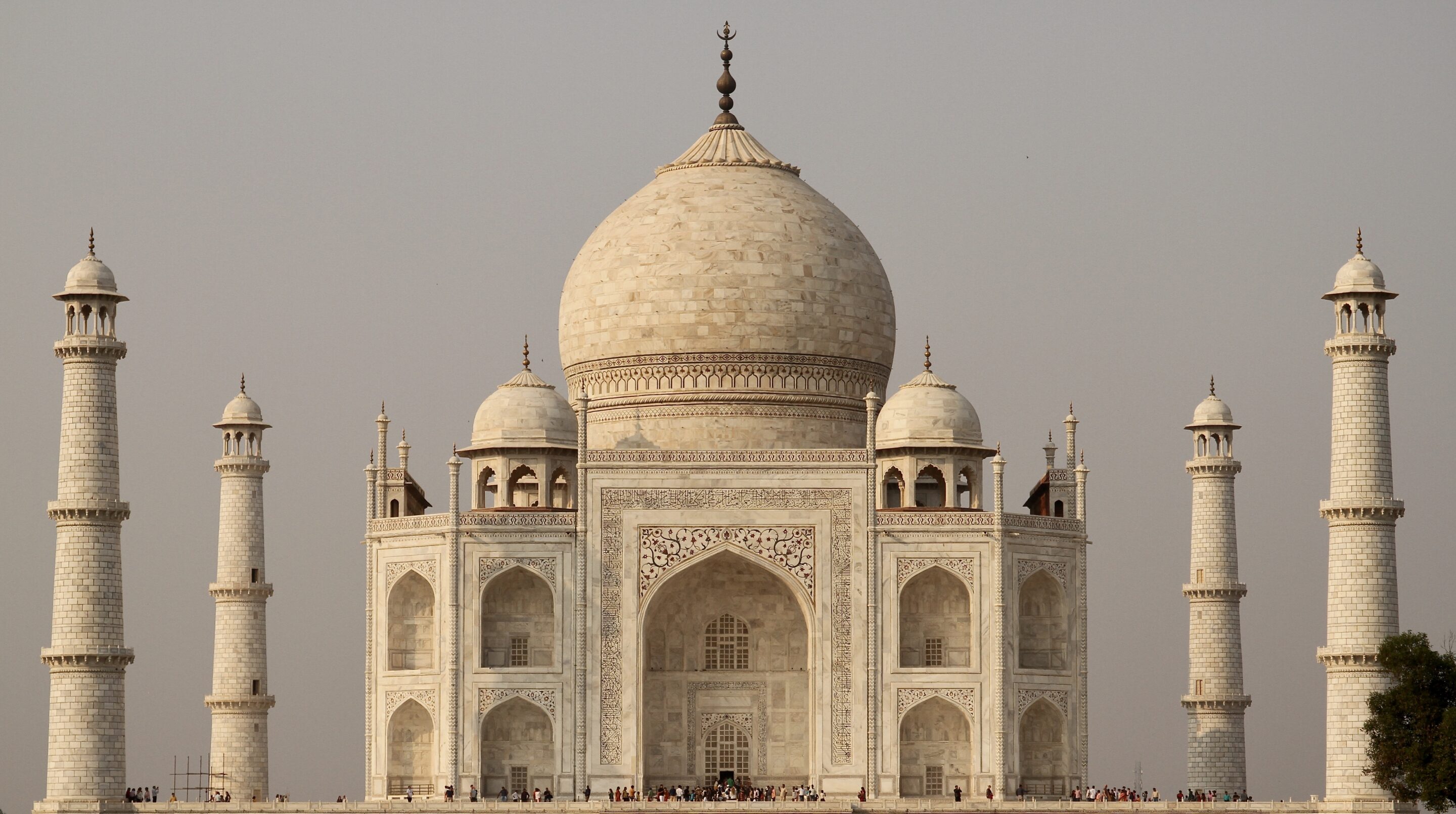 Admittedly, not everyone featured on this post found their happily ever after — but if the post does nothing else, hopefully, it encourages you to appreciate the love you do have, romantic or otherwise. Such a gift is priceless.

Sign up for the Haruni Fine Jewels newsletter and enjoy the latest trends, insights, and creations for all things jewellery, or connect with us on Instagram @HaruniFineJewels and never miss an update.

You would like to send a hint for: “I Love You This Much” — 10 Famous Tokens of Love In History and Pop Culture